The first time I exited Business 10 onto Patrick, I saw the sign: “Midland: City of Modern Explorers.” I remember feeling hopeful that my new home would be progressive and warm. Since then, I have met many friendly and caring people in Midland. I have befriended future-oriented, justice-seeking people in the area. Midland offers amenities of a city many times its size, and is a great place for parents to raise their children.

But under the foundation of the City of Modern Explorers grows a mold. It spreads during the cold dampness of night in the sickly detritus of decay. It eats away at our compassion and understanding. It mocks our modern, forward focus and stifles our exploring nature with fear and bigotry.
Unless we explore our own cellar, we might live unaware of this destructive cancer. If we dismiss the stench of hate and the foul erosion of community, then our City of Modern Explorers may well become a hollow shell of platitudes build on the sandy ground of empty promises.
Recently, a thief vandalized the flag pole in front of the Unitarian Universalist Fellowship that I serve, and stole flags representing our public witness. This was the third time in recent months that someone has taken flags from our property. One flag was the flag of our faith – the chalice of Unitarian Universalism. The others were symbols of our support of equality for gay, bisexual and transgender people. The police shrugged the act off as random nuisance. I do not.
Since moving here, I have inspected Midland’s basement and exposed the mold growing in its shadows. This malignant rot wants to stay hidden and so it attacks in the only way it knows – through intimidation, bullying, insinuation, and taunts. The mold tells you what you want to hear – that everything is alright and that you don’t need to change anything.
I ask you to ignore this lie, because we do need to change something in Midland. If we care about this city, then we need to confront this infestation in our cellar and see it for what it really is. Corruption. Hypocrisy. Arrogance. Evil. If we want Midland to remain a bastion of science and reason, of education, and of family activities and love, then we need to put on our haz-mat suits and enter the basement.
After our flags disappeared, the Midland Daily News published an article about the crime. It did not take long for the mold to spread its spores, suggesting that my congregation had committed this act ourselves as a public relations ploy. I challenged the author to offer proof of his allegation, which of course he could not. In response, however, he posted this black and white image on my Rev. Jeff Liebmann public figure page on Facebook. 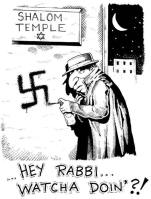 The image sickened me. I hope you can forgive me for feeling the urgency to share this foul drawing with you. In particular, I hope that my Jewish brothers and sisters will forgive sharing such an all too familiar drawing. But, I have read much about propaganda and the growth of Nazi Germany in the 1930’s. The image clearly intends to mimic similar posters created by the Nazis to rile up Antisemitism among the German people, posters like the one shown, which was printed by the Nazis for use in Russia. Look at the two images. Compare the features of the figure, unmistakably meant to mock Jewish people and make it possible to hate them and blame them for social problems. One is more than 80 years old. The other is barely a toddler.
This is how propaganda works. The message attacks people at the fringes, those whose numbers are too small to defend themselves effectively – the Other. Propaganda blames all social woes on the Other, shouting that the Other is inferior and therefore undeserving of our compassion or sympathy. When we see these messages, we might be tempted to write them off as perhaps objectionable, but mostly harmless. Perhaps we discuss the limits of free speech and how we define hate speech. But, in the end, we avoid the conflict and wait for the event to blow over and be forgotten.

Unfortunately, such images are not harmless, nor are they forgotten – and they ARE hate speech. They are not harmless, because some people actually believe the message. They believe the message and the mold slowly takes hold of their souls. They are hate speech because they are cowardly lies fabricated by people raised to believe that they are superior and that their interests matter more than the welfare of others. They are lies because they perpetuate discredited stereotypes and shun facts and evidence like sunlight.
As a religious person, I love my neighbors – all of my neighbors. I seek justice and equality for all people, whatever their culture or ethnicity, sexual orientation or gender identity, age, immigrant or veteran status, level of ability, or religion. I do this because this is a principle of my faith, to affirm and promote justice, equity and compassion in human relations. So I witness publicly against expressions of hate, prejudice, and bigotry. I witness for the oppressed who cannot change the oppressive paradigms of society themselves. And I witness for you, so that you will know the nature of the disease infecting the foundation of our community.
The late social and civil rights activist Julian Bond once spoke at the General Assembly of Unitarian Universalist Congregations at a lecture I was privileged to attend. He told this story.

Two men are sitting by a river and see, to their great surprise, a helpless baby floating by. They rescue the child, and to their horror, another baby soon comes floating down the stream. When that child is pulled to safety, another baby comes along.

As one man plunges into the river a third time, the other rushes upstream. “Come back!” yells the man in the water. “We must save this baby!”

“You save it,” the other yells back. “I’m going to find out who is throwing babies in the river and I’m going to make them stop!”

I am rushing upstream and ask you to join me. The mold eats away at Midland’s foundation every day, but we have the power to stop its spread. We can do this by proclaiming that all people should have equal rights regardless of their sexual orientation or gender identity. Not special rights; equal rights. We can do this by proclaiming that Black Lives Matter; of course all lives matter, but right now we need to show that Black lives matter as much as our own. We can do this by loving our neighbors – all of our neighbors – whether they are Christian or Atheist, Jewish or Muslim, Hindu or Sikh, Buddhist or Agnostic.
Most of all, we need to stand up to bullies and reveal them for what they are – damaged and insecure people nurtured with the stagnant waters of ignorance, the stifling heat of fear, and the cold oppressive brightness of privilege and prejudice.

4 thoughts on “Truth and Meaning: Mold in the Cellar”