Leading 70 congregants in the recent March for Our Lives

During my years of lay leadership, I felt proud of my work, appreciated by those I served, and happy being in my religious communities. I believe that our purpose in life demands honesty, authenticity, and our best effort to strive toward our greatest potential. For many years, I served various roles – father, husband, son, brother, employee, professional – and found fulfillment in each. I have served on a variety of boards and committees in support of local communities and schools. These roles, and a wide range of other volunteer service activities, also prepared me in important ways for an ultimate position in servant leadership.

Our history and living tradition resonate deeply within me. My reading and studies reveal how being a Unitarian Universalist minister offers the opportunity to mentor others as so many people past and present mentored me. And, Unitarian Universalist ministry provides the best venue to develop my prophetic voice and effect desperately needed change in our society and in the world. Reading the words of those that have gone before and my colleagues today only strengthens my commitment to our principles and to the creation of a fair and peaceful world of equality and diversity. 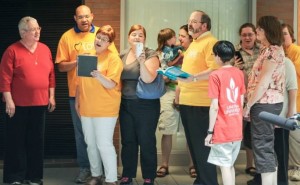 In the end, I believe Unitarian Universalist ministry chose me as much as I chose this path. When called to serve the Unitarian Universalist Fellowship of Midland in 2011, the first major event of my ministry was the eruption onto the national scene of the Occupy Wall Street movement. I spent much of that first year meeting with local members of Occupy the Tri (the tri-cities of Midland, Saginaw, and Bay City), protesting on street corners, writing brochures and editorials, and offering my support and expertise to that amazing populist effort. I believe this experience was no accident and that I was on a path of becoming a prophetic voice for justice.

In 2012, the Michigan Legislature proposed an omnibus package of bills attacking women’s rights and reproductive justice. I drove to Lansing to testify before a House Committee and was shocked to see the 100 women in the room completely ignored and silenced. I was allowed to testify and took advantage of the situation to speak candidly to the legislators about the fallacy and unfairness of their proposed action. I have testified against bills and laws that would allow businesses to discriminate based on their “strongly held religious beliefs,” reduce gun safety, and prohibit marriage equality. I have testified in favor of bills that would expand protections for gay and transgender individuals, provide broader access to affordable health care, and protect the rights of the elderly and of labor unions.

In Columbia, I have spoken many times on the Capitol steps.  On May 14, I was arrested as part of the first week of the Poor Peoples Campaign for blocking a street.  I serve on the statewide Coordinating Committee of that group and helped lead civil disobedience training at the congregation.  I am active in Progress South Carolina, Indivisibles Midlands, and the Women’s Rights and Empowerment Network.  Jody and I also help local youth coordinate March for Our Lives actions for gun reform.

Speaking with a Prophetic Voice

After the tragic murders in Newtown, Connecticut, I wrote a blistering editorial on America’s Gun Culture. The editor of the Midland Daily News invited me to become a regular contributor to the paper’s online blog, which I happily agreed to do. I named my column Truth and Meaning, and wrote weekly for three years on a wide range of topics from a progressive religious point of view, including reproductive justice, religious freedom, right to work, immigration, LGBT equality, marriage equality, gun control, economic injustice, anti-racism, and the belief that all religions can unite in the common belief of loving our neighbors. In addition, I write monthly editorials for the Sunday print version of the newspaper, such as this article on the 50th anniversary of the march in Selma, or this one on economic freedom and the rights of workers.

As a minister, I see myself as a catalyst. I do not have all the answers. I cannot bear everyone’s emotional burdens. I cannot be anyone’s conscience. What I can do, however, is model a religious life lived in covenant with others. I can talk to elected officials, such as the Mayor of Louisville and creator of their Compassionate City efforts. I can comfort the afflicted when needed to strengthen them and constantly remind them that all things are possible. I can afflict the comfortable, when we grow complacent or when we need reminding that Unitarian Universalists stand for principles of meaning and not just the right to “believe whatever you want to believe.” I believe that Unitarian Universalists stand for the free and responsible use of the human tools of courage, reason, and compassion, experiencing life’s capacity for deepest meaning and love.

But, most of all, I can model my Unitarian Universalist heroes who stood up against slavery, who fought for equal rights for women, who opposed war, and who worked to create ways to bring us to the Beloved Community.