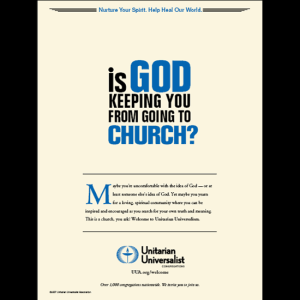 The Unitarian Universalist Association’s national advertising campaign has begun. Advertising in Time Magazine began with the October 15, 2007 issue and will continue over the next several months with placements such as this UUA print ad (also shown to the left).

According to the UUA’s press release, the Time.com Religion Pages will offer links to articles and essays authored by Unitarian Universalists on topics including: the relationship between religion and science; the role of religion in American democracy; and religion, morality, and sexuality.

I certainly applaud the goals of the campaign and believe such an effort is long overdue. Our denomination will always debate issues of the relative merits of any continental efforts and their impacts on congregational polity. But, I personally feel that the relative benefits far outweigh the potential harm.

That said, this first print ad even made me cringe just a little. “Is God keeping you from going to church?” I do understand the desire to be catchy, even controversial, in getting the reader’s attention. The ad certainly appeals to the atheistic, yet religious person within me. But, I have no doubt that many Unitarian Universalists will see this ad and explode in anger over what they will perceive as an anti-theist tone and the heavy reliance on the term “church.”

I will not be one of those criticizing the ad (do not, however, ask me what I think of the new UUA web site, grrrrr). For while I deeply respect those who might find the ad objectionable (and I have no doubt that conversations will continue for many weeks), I will suggest that nearly any attempt to attract broad public interest in Unitarian Universalism in eight words will displease many dedicated UU’s. The reality, however, is that we certainly will never get the millions of readers of Time magazine to read Channing’s Baltimore Sermon or Ballou’s “Treatise on Atonement.” Even the text of the seven principles is too long for the average modern attention span. I do not see this as sufficient reason not to produce such a campaign.

We are a tiny denomination – a soft voice amidst a cacophony of shrill shouts. And yet, we have evidence that many people share our religious philosophy, but are simply unaware that we exist. I see no harm in helping people learn that we are here and that we welcome them with open arms; in fact I believe we have a duty to make our presence known. I see no way to make this omelet without breaking eggs.

The key, in my opinion, is to assess the materials and calmly reflect before reacting one way or the other. Then, encourage discussion in your church, congregation, fellowship, society about the issues. Most importantly, now is the time that we should all pay extremely close attention to our visitors. For while we may take issue with this campaign or its specific contents, the result may be to bring people through our doors asking that question that so many of us have asked — “Where have you people been all my life?”