After breakfast, everyone broke into their work groups. I was part of a group of seven folks working on Ms. Evelyn Green’s house in Center City. Ms. Green is a widow and 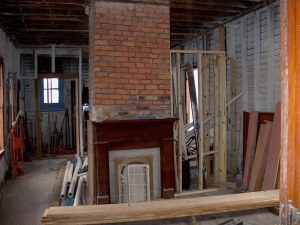 I understand a very prominent person in her neighborhood. During Hurricane Katrina, her roof was damaged and the house sustained a great deal of water damage. By the time she could move back in, water had seeped everywhere and mold was growing.

After hooking up with Hands On New Orleans, crews went into the house and gutted it. All plaster was removed, down to the rafters and joists. Everything was then power washed and treated with mold remover. Now, the crews are working on restoring the inside of this interesting old house, built in the 1890’s. 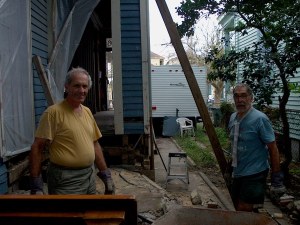 Today, a few of the volunteers worked on creating a window repair space and cataloging all the window parts in the house. Another group demolished a back porch ruined by the storm. We left two of the crew back at based camp to scout out the best prices on specialized equipment that will be needed to finish the outside siding and to research how some of the architectural details can be saved. I worked with one of the crew chiefs building temporary racks to how moldings and trim boards over the next few months.

About midway through the day, a very sharply dressed gentleman approached the house with a photographer. He toured the house and spoke to the workers. As he was leaving, I introduced myself and found out that he was the minister of the nearby church that used to house Hands On New Orleans. The photographer was from the New York Times! When he heard that I was a student minister, he asked if that meant I was a Reverend yet. I said, “Not quite,” but I had a feeling that I may wind up in the article as Reverend Liebmann (I hope I don’t get in trouble with the powers that be!)

Arriving back at base camp, we joined in the Race for the Showers – a thoroughly primitive display in less than ideal circumstances. Oh, well, what’s the point of experience like this if you don’t rough it a little? Dinner and the community meeting are in a few minutes. We have heard that a film crew is arriving from the U.K. for some reason. I didn’t bargain on becoming world famous for one little week of volunteer work!