Today is our first full day at Hands On New Orleans. It is a rest day, so after breakfast we all headed over to the First Unitarian Universalist Church of New Orleans. FUUNO is a beautiful facility that suffered from four feet of flooding during Hurricane Katrina and sustained substantial damage. But, the church has bounced back and is now beginning a major capital campaign in concert with two other area UU churches. I had one amusing moment. During the service, I noticed that my hymnal had a large circular imprint on the front cover. Later, I saw the following inscription on the inside front cover. “This hymnal was used to put out an ‘out of control’ chalice flame Easter Sunday, April 16, 2006.” No deep meaning, but it seems somehow appropriate. 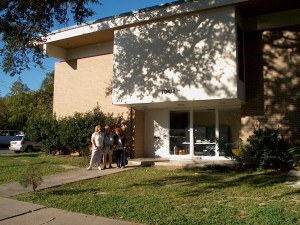 After church we returned to “base camp” for lunch and our first community meeting led by the Hands On coordinator Stefanie. There are several jobs we will be working on this week including: construction on two houses; building a community playground through an organization called Ka Boom; helping the Animal Rescue Shelter of New Orleans (the only ‘no-kill’ shelter in the city); Project Lazarus, which helps AIDS patients; and doing outdoor cleanup and planting work with Groundwork: New Orleans.

After lunch, we piled in the vans to take a tour of the city, especially the most affected areas. The tour consisted of many pages of text carefully prepared by First Church. Eventually, we drove into the Lower Ninth Ward. Watching all of the documentaries did not really prepare me for the desolation. Street after street of what used to be home-lined and tree-lined bustling communities is now just one empty, scrub-filled lot after another. One can literally count on a couple of hands the number of homes that seem to have been repaired completely. Most of the structures still remaining are in various states of disrepair, often with “Do not demolish” spray painted on their sides.

According to the tour, the former residents are besieged on all sides by bureaucracy and a society that has abandoned them. Many home owners (and 68% of the homes in the area were owned by their residents) inherited their houses from parents and never filed official papers regarding the transfers. As a result, home owners unable to prove ownership have been denied compensation or assistance. Also, people whose homes were destroyed and lack the money to rebuild, are being fined by the city if they fail to keep their unusable properties clear of overgrown plants. It doesn’t matter that the population of the area probably numbers in the dozens. No matter how one slices it, the injustice looms massive. It was a sobering experience.

As we looked at the infamous levy, we learned that some people have alleged that the levies were blown up. Apparently, many decades ago, the city blew up the levy in the poorer district in order to spare the richer district from flooding. So, the legacy of this colossal act of public ill lives on. It is not hard to imagine why a local resident would believe stories of government corruption and conspiracy, especially as contractors bilk property owners out of money and developers pressure the city to take over via eminent domain.

The rest of the evening, we spent in the world-renowned French Quarter. Anyone who asks why New Orleans should be rebuilt simply needs to go to this one-of-a-kind site.