Today was KaBOOM day! Almost all of the Pittsburgh Unitarian Universalist volunteers and friends went to a nearby neighborhood to build a playground (a couple of other folks worked with Greenlight New Orleans, changing light bulbs in homes to bulbs that are more efficient and environmentally sound). We were joined by other volunteers in town and a number of Americorps young adults for a total of 75-100 folks. After breaking up into work groups, we built a wide range of playground apparatus (apparati?), built picnic tables and benches, painted a mural, and moved 180 cubic yards of mulch into the playground area. 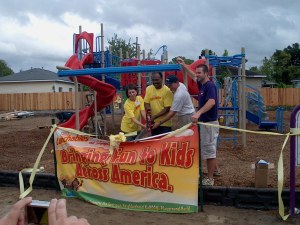 KaBOOM is an interesting organization, whose goal is to build great places to play within walking distance of every child. They have built more than 1,300 to date and ours was the 64th built in the Gulf Coast region post-Katrina. The Louisiana Freedmen Develeopment Corporation and Lunchables (which is interesting because we did not receive a lunchables snack for lunch). Coordinating this wide range of activities without any sense of the skill levels of the volunteers is enormously challenging. The process was definitely aided by the pre-training of team leaders (which took place on Monday), who coordinated the many assignments.

It threatened rain all day, and held off until just near the end of the build. But, it lasted only 15 minutes or so, allowing much of the rest of the work to be finished and the ribbon cutting ceremony to take place around 3:15. There were a number of little ones anxious to start playing, but they had to be kept off until the concrete footers dry. The final project included two slides, swings, a rock climbing wall and several hanging bars.

The setting was very logical, with about one dozen new duplexes sharing a back lot in which the playground was located. It is an excellent model for creating neighborhoods and safe places for kids to play.

This heat and humidity are starting to wear my Northerner body down. A couple of times, we have had short rains followed by sun that turned the area into a sauna. I’m not sure I would ever get used to this climate. They are calling for a high of 89 tomorrow (yikes) with more chance of rain.