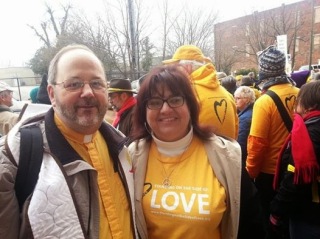 As you read this, my wife and I are driving back to Midland from Raleigh, N.C.. Why did I preach my sermon via Internet video and not from my pulpit this morning? I preached from the road this morning because my predecessors did. Because I can. And because I must.

For centuries, Unitarian Universalist ministers stood at the forefront of change movements: abolishing slavery; developing public education and public health systems; securing civil rights for racial and ethnic minorities, women, LGBT folk and other marginalized people; defending our religious liberties; promoting peace and disarmament; and protecting our representative democracy. I stand on the shoulders of great men and women who have struggled, sacrificed and even died defending our belief in the inherent worth and dignity of every person. And I have the tremendous good fortune to serve a congregation in Midland that supports my work. It is my duty to carry on our legacy of activism.

When the call from the North Carolina NAACP went out for clergy to come to Raleigh, I remembered a similar call that was answered by the Rev. James Reeb and 100 other Unitarian Universalist ministers 40 years ago when the Rev. Dr. Martin Luther King Jr. called for us to stand with him in Selma. Reeb was later killed by racist cowards on the streets of Selma. The circumstances have changed, but the issues very certainly remain the same. I went to Raleigh because I must do whatever I can to stand with my brothers and sisters in justice, equity and compassion, and in defense of the democratic process we hold sacred.

The situation in Michigan today is no less serious. Our legislature continues its war against women by cutting their access to medical treatment and ignoring their voices in Lansing. Our government continues attacking LGBT folk by sanctioning discrimination and limiting the civil rights of loving gay couples. People with inordinate wealth are funding efforts to destroy organized labor and maintain a permanent and growing underclass by suppressing wages and cutting necessary benefits. Gerrymandering and emergency managers have stripped voting power away from half of our state’s African Americans.