Why do so many people drift away from the churches of their childhood? And why do so many of these individuals stop going to any type of church altogether?

I suspect the answer lies in frustration. I was raised in a Christian tradition. As a teenager, however, I found that the church of my birth lacked answers to the questions I was asking. So I went to other houses of worship — Episcopal, Lutheran, Presbyterian, Jewish, Catholic, Methodist — and none provided satisfactory answers to my basic questions about the mysteries of life. The more I searched, the more frustrated I became. How could so many churches claim to have “the” truth when they couldn’t even answer my simple questions? How could each church proclaim to know the true nature of God without all of the other churches being wrong?
According to the “World Christian Encyclopedia: A Comparative Survey of Churches and Religions,” there are 34,000 separate Christian groups in the world. Let us put that into perspective. There is nearly one distinct Christian group in the world for every Christian living in Midland. That means thousands of spiritual practices, thousands of Biblical interpretations, thousands of answers to great questions, and thousands of definitions of God. Major denominations, groups within denominations, sects within those groups, and an untold number of non-denominational, independent entities — and most claim to profess the uniquely correct understanding of the nature of God.
In Midland alone, there are roughly 100 Christian churches. Is it possible that each of these religious communities somehow has a different notion of God and how we should live our lives connected to that God? If so, what possible hope does the world have for peaceful co-existence?
In his song “Imagine,” John Lennon sang the words,

Some interpret Lennon’s life and words as those of someone opposed to religion; even an atheist. But this was not the case. Lennon was quite religious; just not in the same way as many other people here in the West.
What Lennon opposed was the unnecessary fracturing of the world of God’s children into separate religious tribes. Lennon opposed the arrogance of churches claiming to know truth, when no one can know for certain the nature of God. 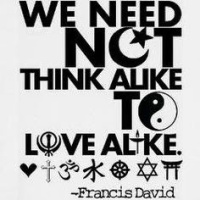 I have my opinions on the nature of existence. I have discerned answers to the big questions in life that work for me. Whatever your religious affiliation, I respect your right to your own opinions, to your own discernment process. All I ask is that you respect mine in return.
Because no one gets to hijack God. No matter how strong your conviction, you don’t get to define God for others. If you allow your opinion about God to justify bad behavior toward those who do not share your views, then you are responsible for your prejudice and discrimination. You are responsible for the pain you inflict on others.
In the end, we are all flawed human beings. We cannot possibly know all truth because our brains are too wired with conflicting emotions, petty distractions, and learned biases. But, like Hindus, we can come together and agree that all spiritual paths eventually lead to God, whatever its nature. We can respect the paths we are on and not use our different journeys as an excuse to hate.
And if we agree with the Universalist attitude that God is love, then we can begin by practicing that belief. Whatever name we use for God, or even if we do not use the construct at all, we can love each other. We can help each other, serve each other, and walk with each other on the path of life.

One thought on “Truth and Meaning: Hijacking God”