Nogales should be a unique and attractive city.  After miles of relatively flat desert and mountains in the distance, you enter on Interstate 19, and are suddenly faced with hills covered with homes of many styles.  It is a vertical city without the benefit of skyscrapers.

Nogales should be a unique city.  I imagine that in years past, the cultures of Mexican Nogales and Nogales, Arizona blended to make a fascinating town.  Streets literally feet apart must have shared neighborhood shops, festivals, and community. 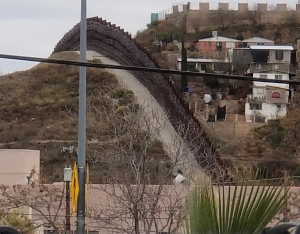 Nogales should be an attractive city.  But now, Nogales is a wounded city.  A horrible gash splits the American and Mexican cities and a militarized gate makes passage between the two a burden, even a danger.  The lumbering monstrosity dominates the landscape, looking for all intent making each city look like a  prison.

We approached the wall having seen news reports of the wall, fence, or whatever we are calling it today.  But nothing can quite prepare you for the horror of it all.  The horror just a few feet away is unspeakable; America is enclosing itself in a concentration camp that would have made the Nazis proud.

And yet, as if to magnify the irony of such a frightening visage of fear and violence, we turned and saw an incredible sight.  Across the street was a dirt driveway leading to a house.  In front of the house were about a dozen peacocks strolling casually and obviously oblivious to our presence.  One had its tail feathers spread full, and another was completely white (something I didn’t know existed.

Such magnificent color against the silver barbed wire; such fragility against the cold steel pillars.  Would that we lived in a world where one was the norm and the other had no reason to exist.