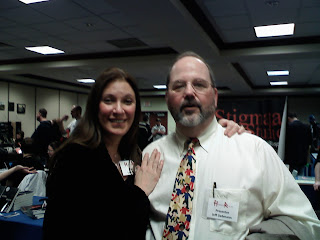 Regular readers of the muse kennel and pizzatorium know that I love zombies.  I watch zombie movies, read zombie books, and have on occasion dressed up like a zombie and shambled with hundreds of other similarly afflicted fans of this genre.

I can speak at great length about the relevance of “zombie theology.”  In fact, I recently spoke at a horror convention, delivering a session titled “Sermon of the Living Dead.”  Afterwards, I bought more some movies, picked up a couple more books, and examined zombie artists and news of upcoming zombie media events.

But, the highlight of my day was the opportunity to meet Lori Cardille. Lori is the daughter of Bill Cardille, known to many Pittsburghers as Chilly Billy Cardilly, host of Chiller Theatre for many years and one of the first horror movie hosts in the country. Lori starred in the lead role of George A. Romero’s third installment of his Living Dead series, Day of the Dead (the 1985 original and not the awful 2008 remake). I remain a huge fan of this film and particularly of Lori’s portrayal of Sarah, a scientist engaged in the hopeless search for a cure to the plague destroying humankind.

After waiting in line for 20 minutes or so, I introduced myself to this lovely and charming woman. We chatted and she signed my DVD of the movie (she donated the proceeds from her appearance to Pittsburgh Action Against Rape). And, I learned something fascinating about her.  She had written a short biographical account of her life, called I’m Gonna Tell.  Always on the lookout for pastoral care resources, I bought a copy and read it that night.

Lori’s account is frank, visceral, and incredibly informative.  For me, her story provided me with incredibly valuable insight into an experience I can only begin to comprehend.  She explores her journey and pain, relationships with relatives and friends, and her eventual confrontation with her abuser.  I would imagine that for a victim of abuse, her book would be healing and wonderfully supportive.