My future weighs heavy on my mind. I am happy.  But, finances, housing, job, relationships…nearly everything lies balancing on a tenuous slope with the spring thaw in sight.  I could not stalk my apartment for another day awaiting phone calls and emails, and so I set out on a saunter.

In his essay “Walking,” Thoreau describes sauntering, “which word is beautifully derived from…à la Sainte Terre — to the holy land…having no particular home, but equally at home everywhere.  For this is the secret of successful sauntering…For every walk is a sort of crusade, preached by some Peter the Hermit in us, to go forth and reconquer this holy land from the hands of the Infidels.”
I needed to hear the voice of the grace of the world in my mind.  Mindful wandering is my spiritual practice and I turned to it now so that I could listen without distraction.
I loaded fresh batteries in my seldom-used camera and set off to the railroad tracks that run along the Youghiogheny River by Smithton.  I don’t know why the railroad tracks are my favorite place to saunter, but I did not hesitate.  To the left lay my church and relatively familiar territory.  To the right, a few houses and then the unknown as the tracks followed the bend of the river. 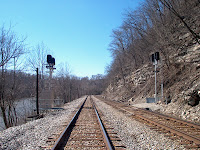 I had not gone far in this direction before.  Since my heart problems two years ago, I have found myself cautious about placing myself far away from help and cell phone signals.  But, today, I knew that I needed to cast all cautions aside.
I always wear sneakers on these walks.  Every time I return, I tell myself that I should wear boots, to better cope with the tricky footing.  But, somehow I like the feel of the ballast rocks through my shoes and the almost-skating motion of walking on the trackbed gravel.  The sun warmed me quickly for early March, and I removed my jacket after a short time.  I passed the last house and ventured forward, the steep hillside on my right and the swollen river on my left.

Soon, I approached the signal towers on either side of the tracks.  This was as far as I had ever gone in previous walks.  The sound of traffic crossing the Smithton Bridge had receded, and I hesitated for just a moment before proceeding. 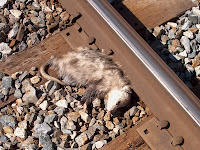 After only a few minutes, an ominous omen (are all omens ominous?).  I saw the body of a dead muskrat lying between the tracks, clearly run over in just the past day or two.  Not an unusual sight – I saw half a dozen or so last year starting in early spring.  The message, however, seemed clear.  Death lay ahead.  I kept walking.

Another few minutes and another animal remnant.  This time, only the hoof and bottom half of a deer’s leg lie between the northbound and southbound rails.  That’s it – no other bones or any other reminder of the substantial body that once was.  Death lay ahead…and dismemberment.  A superstitious person might need no other signs.

The tracks had rounded another bend.  Ahead lay some pieces of wood strewn around the tracks.  Approaching closer, I recognized what remained of a century-old telephone pole – just a little of the cross piece and one glass insulator.  I was now cut off from all communication with my past, figuratively and literally.

Another bend and I saw three houses nearing on the river side of the tracks.  The smell of burning wood drifted toward me and I saw a man clearing away some dead branches and brush in a smoldering barrel.  He raised his hand in greeting and I returned the gesture.  I had emerged through the warnings.  Was I now being welcomed into some precognitive peek? 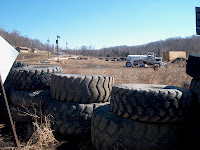 I caught a glimpse of what looked like bleachers coming up on my right and I wondered for a minute what spectator event could possible take place here.  Then I remembered.  The Smithton Hole racetrack – a very distant and poor cousin of Nascar and home to demolition derbies, truck pulls, and quad rallies.  The road that served as access to the houses I had passed crossed the tracks here.  A patch of color caught my eye.  In a ditch I saw a swath of green plants in a heavy-flowing runoff ditch – the first green I have seen this year.  Was something telling me that it was time to leave the railroad tracks? 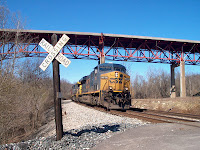 On cue, I heard the whistle of an approaching train.  I walked over to the crossing sign to watch the behemoth rumble by.  Since I was a child, I delighted in counting the cars in long trains.  Only as an adult did I learn that this was one of the many relatively harmless obsessive-compulsive symptoms that seems to run in my family.  Nonetheless, I now find myself resisting the urge to keep track of the passing containers.  Instead, I feel the quiver of the ground and watch the vibrations of rail succumbing to the mass.

After the train went by, I turned and walked up the road. I soon came to a junction.  I knew the road to the right led to Fitz Henry and a dead end.  The road to the left led up a steep hill. I turned toward the open road. 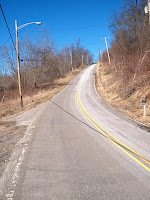 Only a few buildings remain of what was once the town of Port Royal. In the late 1700’s, this area provided valuable access to the river and grain mills and iron furnaces.  George Washington once owned land just to the south near Jacob’s Creek.  What remains hardly qualifies as a town, however, and I soon approached a substantial climb out of the river valley.

By the time I reached the top of the tiny mountain, my joints ached.  A constant wind now blew against my face, invigorating me again.  No thought remained of needing my jacket again, as the sky supporting only one tiny wisp of cloud in the distance.

I knew that the old Port Royal School House sat ahead on this road.  I had researched this structure last year for the 150th anniversary of the Unitarian Universalist Congregation of Smithton.  Here, in 1860, the 11 charter members of the Universalist Church of Port Royal agreed on a covenant, creating the community that survives to this day.  I could not help but wonder if school children from Port Royal actually walked to this school house.  The thought put those clichéd parental stories of childhood struggle and hardship in a whole new perspective.

Also coming into perspective, still miles from home on this gorgeous day, was a calm.  My mind calmed.  For the first time in perhaps weeks, I wasn’t worrying about things over which I had no control.  I wasn’t trying to control things I couldn’t control.  Ironically, I’ve become addicted to an online game called Rebuild.  The game recreates survivors of the apocalypse trying to rebuild a city still infested with zombies, disease, and shortages of food and housing. It now occurred to me that I had spent the last five years rebuilding – my job, my home, my marriage, my mind, and my soul – so that I could set forth on this future as a minister.  In recent months, I kept thinking about all this effort and all that I have done and accomplished to poise myself at this gateway.  Now, I thought, maybe the time has come to stop focusing on the rebuilding and start living in the new life I had built. 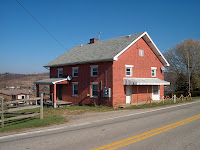 Because, in the end, we can only build the best life we can and then we have to live in it.  We can renovate occasionally, but we can’t control everything – in fact we can control precious little.  So, my joints ached, but I walked a little freer, with just a slight spring to my step.

I walked by the old school house building and thought about those 11 people back in 1860.  The formed a church that still meets today.  But, little did they know that the nation would soon enter into an ugly Civil War.  They could not foresee the rocky future of the little congregation, constantly struggling against all odds to stay afloat.  I imagined the unbridled joy of those men and women starting something special, something that has endured.

I kept on, reaching the truck stop at the intersection Interstate I-70.  Ironically, the store lay in disarray due to major renovations (OK, I get it!).  I bought a Naked smoothie and a diet Mountain Dew.  I drank the smoothie too fast, but my poor out-of-shape body needed the 22 strawberries and 1.5 bananas.  I cracked open the pop and headed home.  The remaining mile down Dutch Hollow was all downhill – a stretch I have driven at least 100 times.

Whatever happens in the next few days, the world will continue.  I may be a little richer or poorer, a little more or less secure.  But, I will endure and I will do whatever I need to do and go wherever I need to go to continue my ministry.