When called to serve the Unitarian Universalist Fellowship of Midland, I was pleased to be moving to the City of Modern Explorers. I envisioned living someplace known for innovation, forward thinking and progress. People I spoke with talked proudly of Midland’s notoriety as a wonderful place to raise a family, a small city filled with the amenities of a larger metropolitan area.

Lately, however, Midland’s notoriety has become overshadowed. We continue to make national, even international news — but not for new inventions, or for cultural achievements. No, Midland has instead become notorious as a bastion of fundamentalist theocracy, intolerance and bigotry. And the latest addition to this sad list…hypocrisy. 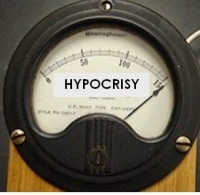 The obsession of homophobic and transphobic public figures in our city is not simply disturbing, but a national embarrassment. And the recent revelation of a local minister decrying homosexuals while engaging in sexual discussions with men on a gay dating website colors the credibility of our community.
Beyond this announcement, the subsequent resignation of the clergy in question, and the unimaginable horror in the future for this family, lies another even more insidious evil that remains unaddressed. How many people have read his words, listened to his speech and felt confused and conflicted, and perhaps filled with self-hatred? How many families has this man “counseled” into dysfunction and broken relationships? How many gay teens have sunk into depression, even attempted suicide because their minister told them that they were sinful?
I feel for his wife and children. I can even find a small measure of sympathy for him. But I reserve most of my concern for the victims of his vitriolic attacks on gay and transgender people. I stand with gays and lesbians, bisexual, transgender, and queer folk and offer my support as they face routine discrimination and public shaming by public officials who lack the will to love their neighbors as themselves.
If you are gay and a minister has told you that you are an abomination, then find another minister. If you are a lesbian and have been shamed by your church as sinful, then seek out a welcoming congregation. If you are transgender and been told that your religion has no room for you, then look for a religion that embraces you. And if you are questioning and hear our representative in Lansing compare you to a pedophile, then join with us.
Midland, we should be sick and tired of being notorious for our intolerance of people because of their sexual orientation or gender identity. The time has come to enhance our notoriety once more. The time is now to add sexual orientation and gender identity to the class of people protected from discrimination in our city. And from now on, our religious and political leaders should know that hate speech is not free speech, and that ancient scriptures do not replace truths proven by verifiable research.